About Our Apple Orchard 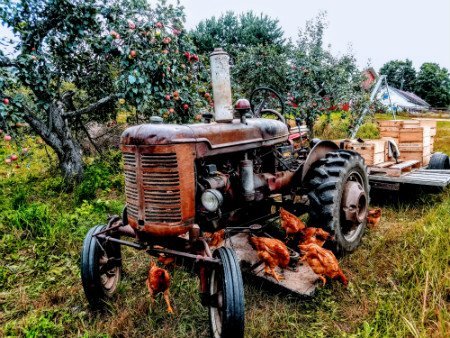 *A few potted trees and small plants available. Our main nursery season is in the spring!

Our apples are produced completely free of synthetic chemicals and are available daily pre-picked or as pick-your-own. We have 20 varieties of apples. Just a note, although we have Honeycrisp, we have varieties with MUCH MORE FLAVOR that are not your standard “store varieties”.

Zestar  – Sweet/tart, crisp, juicy. Excellent early season apple for those who like Honeycrisp.

Beacon  – Tart, firm apple very suitable for fresh eating or baking. Beautiful dark red apple. Cross between a Wealthy and Malinda. One of the first releases of the University of Minnesota.

Wealthy  – Wonderfully crisp, juicy, refreshing. Excellent fresh eating or sauce. Originated in 1868 and was the first apple to thrive in Minnesota after years of trials by a determined private citizen! Became a cornerstone of the University of Minnesota’s breeding program.

Haralson  – Superb pie apple! This is also a great fresh eating apple if you like tart. Firm, crisp apple that is one of Lisa’s favorites! This is a 1913 release from the University of Minnesota. It is thought to be a cross of the Wealthy and Malinda. Sound familiar to the Beacon? 😊

Honeycrisp  – Known for it’s crispiness! Excellent dessert apple. The cell size is twice the size of other apples giving it that crispiness. It is a popular commercial variety because of it’s crispiness and storage…but there are far more flavorful varieties. 🙂

McIntosh  – Aromatic, old time favorite. Developed in Quebec in 1798 and there are now many strains. Wonderful all-purpose apple. Cooks down very well. These are amazing fresh eating apples when they are freshly picked!

Liberty  – Crisp, sweet juicy apple best eaten fresh, but suitable for cooking. Developed at Purdue, a cross between the Macoun and a Purdue apple.

*Special note – Cortlands and McIntosh are highly susceptible to apple scab and are tough to find grown without the contact-burn fungicides that are typically used in orchards. We are quite proud to be offering all of our varieties grown completely free of synthetic or “organic approved” fungicides.

Spartan – Crisp, sprightly dark red apple. A favorite of those who know it! Excellent dessert apple, but can also be used in cooking. Originated in British Columbia in 1936 and is a McIntosh x Newtown Pippin cross. One of Lisa’s favorites!

2023 Nursery ordering has begun and goes through April 1st. Pre-order pickup and regular store shopping will be April 21st-May 21st.

Grandview has a selection of fruit trees, small fruits and shade trees along with a limited selection of other perennial plants!

Browse Our Other Products

View some of our other delicious, natural products. We have apple cider in half and full gallons, pies made from our apples along with locally made: honey, maple syrup, candles, soaps, crafts, etc. A little of something for everyone!